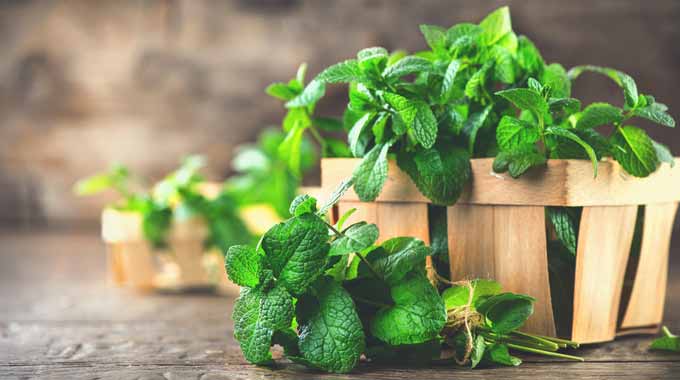 We love mint! It’s one of the easiest and most affordable herbs to grow. Just a few plants can bring you an entire harvest in just a few months, with no work involved.

There’s a problem though. Mint spreads like crazy. It doesn’t matter if you plant it in a container or in the ground; when you cut it back, it starts growing again almost immediately.

You have to be careful not to leave any roots behind so your mint won’t come back again next season. So, what can you do to stop it from spreading?

Here is an awesome and easy guide for gardeners, specifically, on how to stop mint from spreading through their entire garden.

Method 1: Prevent Mint from Taking Root in the Garden

Mint is a perennial plant in the mint family, and it can grow to about a foot tall. Mint plants can spread by underground roots, and if you don’t want your mint to take over your garden, you can prune off the plant’s stems to stop them from growing.

But be careful because cutting a mint plant’s stem will also cause it to send up new shoots from the bottom. You can either remove these new stems or let them grow.

Method 2: Stop Mint before It Spreads

There are many ways to stop mint from taking over your garden and spoiling your lawn. You can spray it with a diluted solution of baking soda, vinegar, or citrus juice, and then wait a day before raking up the leaves, or you can use a mixture of 10 parts water and one part salt.

Another trick is to plant peppermint or spearmint in a small container near the garden, and you’ll find that the mint will grow only where you put it.

If you want to reduce the amount of mint you have to grow, and then start with your most productive plant. Mint likes moist soil and tends to grow best where its roots are able to breathe.

This is why it grows at the shrubs’ bases and along the edge of the ground where water collects. You can control this by keeping your soil moist and allowing air to penetrate the soil.

Remove the leaves before they mature. The plants tend to stop growing and look for a new home if they are removed.

When you want to divide mint, wait until the plant is dormant and about half-grown. If you cut the stem below the leaf node, the plant will start to grow back and produce more leaves.

Method 4: Prevent Mint from Growing in New Areas of the Garden

Mint has many uses, and if you have some growing in your garden or around your home, you may want to prevent it from growing in new areas.

Mint loves heat, and when it’s planted in a sunny location, it will grow more quickly than in cooler locations.

You can stop this by covering the mint with black plastic mulch, reflecting the sun’s rays and keeping the plant cool. If you don’t cover it up, the plants will begin to sprawl and will need to be trimmed back frequently.

Many people are frustrated when they see mint growing out of control in their gardens and they want to remove it. However, the plant isn’t just going to disappear.

It’s going to come back and start growing even more! So, what’s a gardener to do? The best thing to do is to remove the mint from its original growing area and move it to a new location.

This is the only way to make sure it won’t grow back. You can also keep it out of your garden by covering the soil with something like cardboard or concrete to prevent seeds from germinating.

If you want to grow mint in your garden, don’t plant it in areas of your yard that are already occupied by a tree, bush, or another plant. Mint is a vigorous grower and will often overwhelm its neighbor in a year or two.

And if you don’t want to plant mint in your lawn, you can put up barriers around it, so it doesn’t grow there. You should also pick out the areas where you don’t want to grow the herb. You can remove some soil or put up a fence.

You can eliminate other perennial plants around mint by cutting the top off the stem. A new set of leaves will sprout from the stump when the plant blooms.

This is a good time to pull up the plant by the roots and replant it elsewhere. If you’re really determined to keep the plant, consider putting some barrier in between the plant and another perennial so that it won’t compete with your other flowers.

Method 8: Prevent Mint from Sprouting from Buds and Seeds

Mint will sprout from buds and seeds and grow up to 12 inches in a single day, which is why you have to be vigilant about its spread.

Mint is very susceptible to pests, such as aphids, mealybugs, and thrips, which can easily damage the plant and spread throughout your garden.

Use a magnifying glass and a small pair of tweezers to check for these pests on your mint. These pests can easily destroy mint by sucking out its juice, leaving you with a useless plant.

There are many ways to get rid of mint, and while some of these methods work, the best method for keeping mint at bay is the one most people don’t use: weed killer.

But you need to use the right kind of weed killer for the job. Most commercial weed killers are dangerous for plants and even for humans.

Method 10: Keep Mint and Related Weeds Out of the Garden

If you want to keep mint and related weeds out of your garden, consider some of the following tips:

Don’t plant mint near ornamental shrubs or flowers. You may want to put your mint patch between two rows of perennials to prevent cross-pollination.

You shouldn’t grow mint where you want to harvest fresh herbs. The aroma will spread, and it’s likely to attract deer, which could ruin your harvest.

To get rid of mint, simply cut off the plant’s base. Mint roots don’t spread very far, and it’s easy to remove the base without harming the plant itself.

If you want to keep some mint in your garden, you can either put it in a pot or take it outside, but it’s best to remove it as soon as possible to avoid an infestation.

Mint has a bad reputation for invading gardens, eating lawn grass, and creating problems for those who want to grow edibles.

It’s a pretty easy plant to grow from seed, but it grows fast and becomes invasive once it’s established, often creating problems in places where it doesn’t belong.

Several gardening experts recommend cutting back or pulling out the plants once they become too big and strong, but this might not always is possible.

You can prevent the mint from taking over your garden by controlling it from the start. Mint seeds need lots of water to germinate, so if you want to try growing them, you’ll have to either put down a sprinkler or water the seedlings to make sure they don’t dry out.

You can also plant mint in areas that aren’t part of your garden. In this case, you’ll need to be careful not to let the plants get too big, though you can also dig up the plants before they become too large.

To stop mint from spreading through the garden, plant mint in one spot first, then move to another spot once the mint has spread out.

You should also try to plant the mint on a slope so that water can drain away from the plant. To make removing the mint from the garden easier, pull the leaves off of the plant when they are still young.