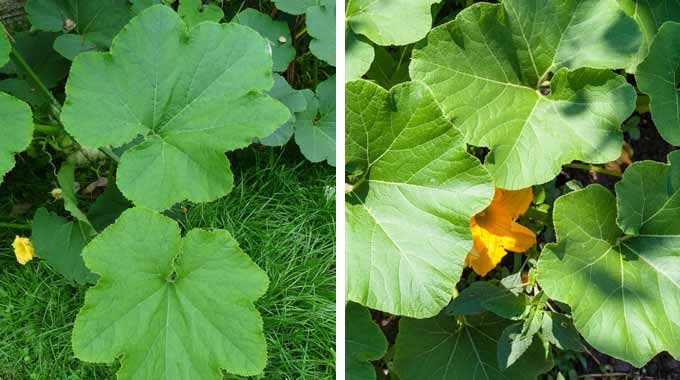 Pumpkins are often used for decorative purposes, but they also have edible parts. The leaves of the pumpkin plant are another edible part that is sometimes eaten as a vegetable in some cultures.

Pumpkin leaves taste similar to spinach and can be cooked by boiling or steaming them. Squash plants produce squash fruits that look like pumpkins but come in many colors including yellow, green, orange, and blue.

The article discusses the difference between pumpkin leaves vs squash leaves.

What are Pumpkin Leaves and Squash Leaves?

Pumpkin leaves are the leaves of a pumpkin plant, which is a vine-enjoy flowering plant whose fruits are orange or yellow spherical fruit known as pumpkins.

The edible parts of the pumpkin include the flesh and seeds, but there are also many other uses for it. For example, they can eat its flowers and its leaves.

As for squash leaves, they are the leaves of a squash plant. A squash plant is one that produces fruits called squashes or gourds in many various colors and shapes including yellow, green, orange, and blue.

The leaves of squash and pumpkin differ in size, texture, and flavor. Pumpkin leaves resemble spinach but they are larger than the average spinach leaf. Pumpkin leaves have a much stronger aroma than spinach and they also have a spicy flavor.

Both pumpkin leaves and squash leaves have health benefits that are listed below.

They are also low in calories but they have a high content of iron which makes up nearly 10 percent of the daily value intake requirement per serving.

Iron consumption is essential because it contributes too many body functions including your circulation, immunity levels, and metabolism.

These plants are rich in vitamin A which is an antioxidant that protects the skin against free radicals that can lead to cancerous cells.

They also have a high content of magnesium which is necessary for normal metabolism and converting food into energy.

Leaf Difference Between a Pumpkin and A Squash

While the leaves of both plants are edible, they have different flavors. Pumpkin leaves taste similar to spinach with a stronger flavor. They can be picked young and added to stir-fries or sauteed for a side dish.

Pumpkin leaf dishes are very popular in Asia and Africa. They need only a few minutes to cook.

Squash leaves are milder tasting than pumpkin leaves. They can be used in soups, stews, or teas. Cooking them will reduce their health benefits but they are still nutritious when eaten raw.

The main difference between pumpkins leaves vs squash leaves is the taste and texture of each plant’s leaves. Pumpkin plants have larger, thicker leaves with a spicy aroma as opposed to squash plants having smaller, more delicate leaves with a milder flavor.

Squash plants are rich in vitamin A which is an antioxidant that protects the skin against free radicals that can lead to cancerous cells. They also have a high content of magnesium which is necessary for normal metabolism and converting food into energy.

Pumpkin leaves have a much stronger aroma than spinach and they also have a spicy flavor. They are usually boiled in water for about 20 minutes until it softens. Then, season them with fish sauce (patis) or soy sauce along with white onion and garlic powder.

Squash plant has sweet-tasting leaves that can be eaten raw. To prepare them, wash the leaves and boil them until it becomes really soft. Change the water several times or else the leaves will turn brownish.

One thing to remember is that they are both eaten as vegetables, but they vary from each other in terms of their taste.

Pumpkin leaves taste a lot like spinach and it has a spicy flavor to them. Squash plant is sweet-tasting because of their high content of sugar that makes them taste better when dipped in sinamak or fish sauce (patis).

They also taste good when combined with tomatoes, onions along with salt and pepper.

Recipes for Both Pumpkin And Squash Plants

You can also combine both pumpkin leaves and squash leaves in one dish to create variety. Both are great tasting when mixed with the following ingredients:

Pumpkin leaves + squash leaves + carrots + tomatoes = pinakbet this is a classic Filipino dish that has been around since before the Spanish colonized the Philippines. Pinakbet is a vegetable stew that contains bitter melon, eggplant, okra, string beans, and other vegetables.

Pumpkin leaves + squash = soup another way to enjoy both plants at the same time is by preparing a dish with pumpkin leaves and squash in it. You can make a soup for this dish by sauteing them together and adding salt and pepper. Then, add beef broth to create a tasty dish that you can eat for lunch or dinner.

Squash leaves + garlic + tomatoes = pinangat Pinangat is another classic dish in the Philippines that has been around since before Spanish colonization. It’s made from malunggay (moringa) along with some other vegetables. They usually add tomato to create a more flavorful dish that goes well with rice.

Side Effects and Cautions When Consuming Pumpkin Leaves and Squash Leaves

Pumpkin leaves should not be consumed by women who are pregnant or breastfeeding, people who have anemia, intestinal blockage, vomiting blood, or taking blood-thinning medications.

Pumpkin leaves are more nutritious than squash leaves because it contains more vitamins than the latter. Squash plant is sweeter tasting, but it still needs to be mixed with other ingredients in order to bring out its flavor.

It does not contain many nutrients, and they usually ate it with other ingredients. The taste of both vegetables is different but they can be used in the same way to make a tasty dish.